Now that the dust has settled down, we wanted to share our impressions from our appearance in Die Höhle Der Löwen on VOX. It was an incredible experience that we definitely learned a lot from. Despite the results from the investors, the overwhelmingly positive crowd response gave us an additional push to keep moving forward. To share some details about our experience, we will tell you what the entire process looked like from start to finish.

How did you end up with the idea of pitching on Die Höhle Der Löwen?

Honestly, it wasn’t my idea at all. After years of developing different prototypes for Res-T, my friends kept telling me: “Hey, you should apply for Die Höhle Der Löwen, it might be a great opportunity to gain exposure and potentially get a positive response and investors!”. Initially, I kept dismissing it, thinking my friends were just being silly. After months of having friends mention that to me, and after the 10th time hearing that same sentence, I decided to actually do it.

What were your expectations before pitching on Die Höhle Der Löwen?

I think everyone has the same expectations from this show – gain recognition and come to an investment or funding agreement. Ideally, this would have been it. We were also just extremely excited to get in front of the TV screen and present Res-T to a large audience. It would help us see what people thought and check if the idea is worth pursuing further. Lots of time, money and effort went into developing Res-T by that point, but it’s different when you get feedback from friends. Feedback from people you don’t know can help you get some ideas that you might not’ve thought about before.

Our first impression when we got into the studio was that it was a very impressive operation, we were a bit shocked to see how many people are actually involved in this operation.

Even though we felt relaxed before the show began, we were a little nervous when we were supposed to start. Things look a lot different when you have to stand in front of the five lions, surrounded by a bunch of cameras and lights! Overall, it was an incredibly nice experience and a lot of fun.

It was very challenging and the Lions asked a lot of questions. We didn’t get financial support from the Lions, which was a little disappointing. Still, we remembered that we went into the show mainly expecting to just have fun, gain exposure and see if this is something that is worth pursuing even further.

Next step, wait for Die Höhle Der Löwen to broadcast the show

We had to wait for almost a year before they broadcasted the show on TV. No writing‘ about Die Höhle Der Löwen, no mention of our appearance in the show in any way. We were extremely anxious to see what would happen. 18th of April, 2022 at 20:00 was the moment of truth. W already knew what they told us in the show, but still incredibly excited (and nervous!) to see what the viewers would say.

After watching Die Höhle Der Löwen, we were anxiously waiting to see the response people would have. The number of positive messages people sent us both through e-mail and our social media accounts overwhelmed us. Over 13000 people visited our website on that day alone, which was an incredible achievement. We also received the first orders on the Res-T website, making us incredibly proud. All of the comments gave us the push keep working hard towards making Res-T a reality.

We went through a lot of obstacles with quality control, distribution, import, missed production deadlines and other problems. That kept piling up at a time when we wanted to give Res-T to the people as quickly as possible. Most of the people kept their orders and waited for their Res-T to arrive, to which we are eternally thankful.

Appearing on Die Höhle Der Löwen was an amazing experience with a lot of lessons learned and lots of takeaways. We are extremely thankful to our first customers and all of the positive comments and constructive criticism on Res-T. Without all of these people and their support, Res-T would have never become a reality.

What is next for Res-T?

We are now on our mission to get Res-T in as many hands as possible. Actually activating Res-T is something we hope will never have to happen. Still, people need to feel safe knowing that an activator pull and 2 seconds are the only things separating them from safety in the water, if they ever find themselves in danger. 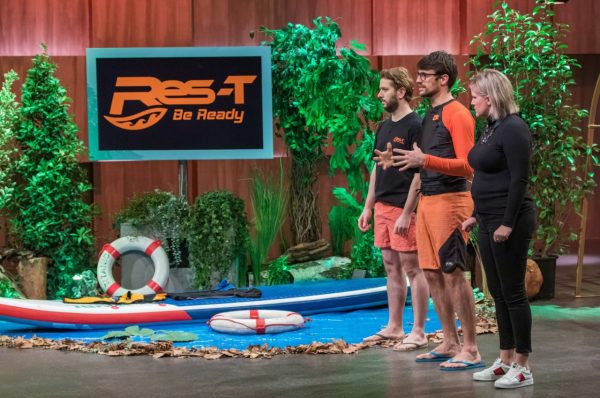 Manage Cookie Consent
To provide the best experiences, we use technologies like cookies to store and/or access device information. Consenting to these technologies will allow us to process data such as browsing behavior or unique IDs on this site. Not consenting or withdrawing consent, may adversely affect certain features and functions.
Optionen verwalten Dienste verwalten Anbieter verwalten Lese mehr über diese Zwecke
View preferences
{title} {title} {title}

Your cart is empty Continue Shopping

Successfully added to your cart.